Wikia is at the 2013 Game Developers Conference. Today we have put on our shadow-suit, stalked through air vents, and made our way into a talk by Lead Designer Nels Anderson on designing Mark of the Ninja. Check out the highlights and insights below.

On Mark of the Ninja, Anderson and the team intentionally took a lot of risks, and they paid off. That being said, it's also a game that exists firmly within the stealth genre. The importance of genre, as Anderson sees is, is that "creators can communally explore an idea" and offer "shorthand for players" to understand core game ideas.

Of course, genre is a double-edged sword. Genre can also output boring tropes. It could become "the same set of ideas, over and over again," and target the same group of players. Designers must avoid becoming too niche and too broad. A classic example of a game that walks that line, that innovates within a particular genre, is Amnesia: The Dark Descent. The creators "understood what that genre was about," Anderson describes. In the case of Amnesia, realizing games did not need guns freed them from that burden and let them hone an amazing game.

Thief provided Nels an essential piece of inspiration for the stealth genre. "Fundamentally the world has no awareness of the player," he explains, which results in a world that has to have its own logic. It's easier to imagine a "designer-directed," linear experience, Nels continues, but there is still much to discover in games that let players act "intentionally." In many ways, he states, "games are more like strategy games."

The Five Heresies of Ninja 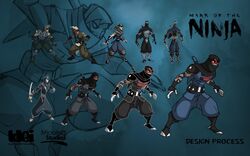 Intentional play and player-centric systems define stealth games, but to achieve these, the team had to violate many stealth norms:

Making a genre experience is a potentially rewarding endeavor, but it's also dangerous. As Anderson explains, when you work within a genre, it's easy to start creating features just because "that's how everybody does it." Instead, designers should be courageous enough to abandon many genre trappings to "find the core" of whichever genre you are working in. "Ninja," Nels concludes, "was built standing on the shoulders of giants."

Retrieved from "https://markoftheninja.fandom.com/wiki/User_blog:JAlbor/GDC_2013:_Mark_of_the_Ninja_and_the_Five_Genre_Heresies?oldid=4654"
Community content is available under CC-BY-SA unless otherwise noted.